take it outside. It is okay to confine a dog/puppy overnight because when they are sleeping their systems shut down. It is best to crate the dog or puppy in your bedroom. This gives the dog 6-8 additional hours with you. Dogs crated in the bedroom where you are sleeping tend to be calmer, less needy, along with being less demanding of your attention.

Try to keep the dog or puppy out of rooms with soft surfaces until the dog/pup reliable. You can use baby gates to limit the dog’s access to certain rooms. You cannot trust your puppy to treat the whole house as his/her den until it is fully mature. When adopting an older dog expect a bit of a transition period. This can last about a month while limiting the dogs responsibility as if it were still a young puppy.

Change of residence for a dogs can be stressful with possible house training mistakes as a result of such stress. Usually when a dog has a mistake..it means they don't have a clue as to what is expected of them. They have not associated the area they have messed in as being part of their den. Hence why limiting responsibility is a must and do not give the dog unsupervised freedom of the house until it's reliable for weeks

Medical issues may be a culprit. Be sure the dog has had a veterinary check up along with a stool examination. Bring a fresh AM sample to vet to check for parasites which cannot be seen with the naked eye.

Sometimes too much or too little attention can lead to accidents as well as changes in the household. Changes can be new residents, new pets or radical changes in your work schedule or routine with dog/puppy. Be aware that if you have toddlers and should their pampers leak, this can also trigger accidents.

The secret to success is to get the dog on a schedule. Put the dog out at high points of probability. Don't rely on the dog telling you it has to go. That does not work if you are gone, sleeping, showering, etc.

High points of probability to put dog out are:

**Note..Keep dog under strict visual supervision until it does relieve itself outside

Of course some dogs may vary with its toilet patterns. If the dog slips up and messes before scheduled time, do get it out that much sooner in the future. If you catch the dog starting to mess in the house,do not punish the dog or puppy. A negative sound may be needed with some training but definitely not for house training. Swiftly/gently pick up the dog to interrupt and rush it outside. Never punish an accident. Do not ask him/her if they did it or stick their nose in it. Punishing or yelling at a dog when house training is ineffective.The dog will not connect your anger with its mistake. It will only associate your presence with anger and not the mess. If you punish, the dog may become reluctant to relieve itself outdoors when you are around for fear of being scolded. Nor should you correct after the fact for it may cause the dog to fear you or at the very least create stress and confusion. So when an accident occurs, think about why it occurred and see that you don't put dog/puppy in a position where it can repeat that mistake.

When accidents do occur, it is important to neutralize the odor with an enzyme type cleaner. Nature’s Miracle is highly effective and sold in pet supply stores. Do not clean pet messes with ammonia because it has the same odor properties as urine. Nor should you use a deodorizer for the odor will only be layered, not removed. Dogs can smell something diluted a million to one. We can smell only a ten to one dilution. A chemical change in the spot must occur so dog is not lured back to the spot again via smell. You can create your own enzyme type cleaner by mixing a solution that is 25% white vinegar and 75% water but Nature's Miracle is more effective/efficient.

When you put the dog out, make sure it does urinate and/or defecate. Dogs normally have a bowel movement after each meal. If pup has not relieved itself when taken out...keep it on a very short leash attached to your side or tied very short to where you are sitting. Take it outside every 10 to 15 minutes until it does relieve itself. Try to be sure the dog is taken to a calm and less visual/audio distracting area where it can focus on relieving itself. Do not praise dog when it is relieving itself as that may distract from task at hand and interrupt the process..but do calmly praise it afterwards..Do not play with dog outside until it has finished. You can train a dog to relieve itself in a specific area provided you consistantly take it to that specific area every time on a leash. If you do not have a yard..take the dog to an acceptable preferably grassy area(not a neighbor's lawn) and immediately pick up after it. If dog does go in your yard clean up immediately to avoid flies and sanitation issues. It will also prevent you and dog from having to to tip toe through a 'minefield'. Many dogs will not want to venture into an area that is too messy.  Follow these guidelines and the task of dog or puppy house training will for sure be much easier on both you and your furry friend. 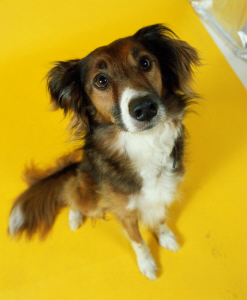 The number one reason dogs are given up is because they are not house trained.

The most effective way to house train a dog/puppy is to limit its responsibility.

Keep the dog/pup in your line of vision. Stay ahead of the messes.
If the dog is given enough chances to go out, most if not all accidents can be prevented.

When trying to limit the dog’s responsibility in the house, crate training is best.

When the dog/puppy is left alone or at night it should be in a crate. The crate should be large enough for the dog to stand up,turn around and sleep comfortably. The first step in house training is to teach the dog/puppy to keep its crate clean. The dog/pup will begin to see the crate as his/her den. When using the crate do not leave the dog/puppy alone for more than 4 to 5 hours at a time. After 4 to 5 hours have someone walk or

Having Housetraining Problems with your Dog or Puppy?