We wanted to write to you and let you know how pleased we were with your dog training program. Your initial visit to our home to learn about our puppy and the helpful hints on housebreaking, teething and prevention of bad habits was most beneficial. Our puppy was housebroken in only a few days and to this day has yet to chew up anything other than a sock.

I wish to take this opportunity to thank you for the very thorough
job you did in training my American Pit Bull Terrier. Not only has he become quite obedient and responsive to commands, but I am most pleased by his progress in overcoming a number of fears and bad habits that he acquired as a puppy.

Furthermore, I feel you more than fulfilled your end of the bargain in training our dog and I would wholeheartedly recommend you as a trainer to any person who has a dog requiring such attention,

To Whom It May Concern:

At the recommendation of friends, we engaged the services of Bob Maida for our Dachsund who was having behavior problems related to submission and subsequent uncontrollable wetting. After following the directions Mr. Maida gave us on how to approach our dog with positive methods, within a very short period of time the wetting ceased and our dog showed active signs of aggression of an acceptable nature.

We are very impressed with Mr. Maida's insights into animal behavior and recommend him highly for either basic training or particular behavioral problems.


I was at my wits end, my unruly Welsh Terrier splaying himself on our sliding doors trying to go through to catch the squirrel out front while tearing down the vertical blinds sending me into tears. Just to keep him safe we had to tie him to the coffee table. I couldn't run the vacum cleaner without him trying to tear my clothes he hated the noise so much.

He had to be put in the crate if anyone came over due to his exuberance. He jumped and shook and shivered with excitement and wouldn't leave guests alone.

I could have put up with all that I guess (maybe not) but my Welsh Terrier was 'dog aggressive'. I called it 'firing off' when he saw a dog while on his leash and he became 'possessed' as if he was going to tear the dog a 'new one'. Really scary stuff. I was afraid that one day he would 'fire off' at the wrong dog.

I wanted to update you on how well Ace is doing. Right now Jim and I have my daughters two goldens for 3 weeks and the three dogs share the house and toys peacefully. I can't walk fast for 45 min. so my dog carer walks the three of them and she says Ace sets the good example when a jogger or walker goes by. He's wonderful with my granddaughter, now 14 months old.I can tell him to "Go lay down" in a quiet voice, and he will go right to his bed. People are amazed at how well behaved he is. On walks, Ace is happy to greet other dogs whose owners allow them to approach, but otherwise ignores barking dogs in yards. What a difference! He is no longer fearful and can enjoy the company of other friendly dogs.

Many thanks for visiting yesterday and helping us in continuing Misty's training. Her time with you was certainly well spent and we are most appreciative. Considering her lack of discipline when we brought her in, we are amazed at what you were able to do in only three weeks.

It hardly seems possible that it has been eleven years since we brought our first Cairn, McDuff to you with many of the same problems you faced with Misty. While Duff won quite a few ribbons, her claim to fame was in her being a perfect pet. Whether in our New York apartment or at the eastern shore she presented no problem whatsoever and I am sure that her early training had a great deal to do with it. Many thanks again for your help.

We can not THANK YOU enough for what you did for Rocky.When we rescued Rocky seven months ago, everyone thought we were crazy; getting a 60 lbs full grown Pit Bull (he was already 2 years old and badly abused). Despite this, my family and I were all very excited and still hopeful .When I called you, I was pretty sure that we would not be able to keep Rocky, due to his aggression. When someone would come into our home, he would go to bite them (or kill we weren't sure which one due to the growling). We resorted to walking him very early in the morning & later in the evening, when people and dogs were not around.

Your first visit occurred three weeks ago and you showed us what we needed to do in order to handle an aggressive dog. When you returned you came into a house with a NEW ROCKY. He no longer jumps on the couch to look out the window. He does not come up on the beds, because he has learned his place in the family. If I need to go outside, for a minute, I tell Rocky to sit and stay. When I return he is still sitting there. This really amazed us because he was so out of control before you arrived.

Since you trained us on the proper ways to train Rocky, we can now walk him anytime of the day. If, during our walks, I stop to talk to someone, Rocky sits down and patiently waits to continue our walk. People can now come into the house and he is able to remain calm and not growl.. Rocky finally learned that all people are not bad. Though he still has a lot of reinforcing in his future, thanks to you, it is obvious that Rocky has a future with our family, his new forever home. Donna 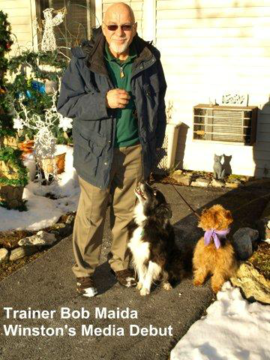 I wanted you to know we appreciated very much your help in training Kiltie. He has behaved much better since the return home after being at your school, and we appreciate the careful, conscientious, and skilled guidance you gave to him and us. Many thanks again,

Here's what satisfied dog owners have to say about Dog Training by Bob Maida.

Once again I salute you as Washington's number one trainer.
The job you did with Mr. Jones was outstanding and having already observed the great job you did with Saqr, I can only say "thank you" and that you are really a master in your profession.
Please feel free to use me as a reference at anytime anyone wants to know how really good you are.

Thanks again, and with all very best wishes!

​​The sad part of all this is that we had been going to group training for at least four years and while he learned to sit, down, come and stay, he would not do any of it unless he got a treat. He was food driven. Class after class my dog would only get near other dogs if I had a hand full of the most delicious treats and kept giving them to him for the whole exercise. I felt like a 'PEZ' dispenser. He never improved over four years and I blamed myself for not using the positive reinforcement correctly.

Finally my husband approached the subject of getting rid of the dog. I got on the internet and contacted a dog trainer named Bob Maida. His website was impressive and he seemed to offer a sensible alternative to the reinforcement that wasn't working. As soon as he taught me to introduce 'correction' into the equation, things began to change. The treats became random; affection and praise were emphasized, and I got my dog back with Bob's help and instruction.

My dog is no longer tied up and has freedom. He is mostly a happy gentleman. Bob gave me resources to read; a video tape to remind me what we went over in our session; and a followup visit. I even called him in between when I was frustrated. The 'dog aggression' is still being addressed, but thanks to Bob's help I am on my way. Treats cannot solve everything.

If you have gone through some of this tough dog stuff and you feel that you are a failure because all the treats in the world will not make fido into the dog he was meant to be, give Bob Maida a call!!!!
All the best,

I adopted Brigid, a year and a half old Akita mix, who was an outdoor dog in her previous life, from NYC Animal Care and Control in Brooklyn.  When I brought her home she was docile at first but during the next three months she became more protective of me and aggressive towards other dogs.  Her behavior made me worried that I would be dealing with an overly aggressive and dangerous dog as she got older.

I was desperate for help and through referrals from other dog trainers I found Bob.  Bob came in and immediately started changing her behavior. I didn't think it could happen that quickly. He identified that she was not properly socialized and was more fearful than aggressive.   We worked together for just over 3 hours and when he left I felt I had the tools and methods to address the behavioral issues that Brigid had.

After two weeks Bob and I met again and brushed up on my training.  I am thrilled with how Brigid is responding.  We still have some work to do but now I feel I can handle her and she will be the wonderful dog I know she can be.
Thanks for all your help Bob,